Background of the Club

Delta Cricket Club was formed in 1979, under the banner of the then Natal Cricket Board. Delta in the NCB, made quick progress and had reached the Super League. With unification under the Natal Cricket Union, the club was offered Premier League status. This was declined at the time, as the clubs committee felt that the Club was not ready to play at the highest level. Subsequently, Delta won promotion through the various divisions and achieved premier league status in the season 98/99. Delta is the only development club in the premier league that achieved its status on merit. Delta as a club has grown and now consists of 10 senior and 11 junior clubs, and a ladies team which is a far cry from the single team started in 1979.

The 2001/2002 cricket season was a successful one for the club as we finished 5th in a league comprising 16 teams. We won the premier league knockout cup, beating the previous season’s double winners Collegian’s in the semi-final and Chatsworth in the final. In 2002/2003, Delta went one better and won the Premier League.

Delta represented the province at the national club champs in Pretoria in September (M-Net Supersport televised the event). Delta finished third. In the season 2003/2004, Delta won the knockout cup and in the season just passed Delta came second in the league and won the knockout cup beating Crusaders (League winners) in the semi-final and DHS Pirates (8 Dolphins players played for them) in the final.

Through our success, Delta has been able to acquire the services of a number of international and provincial players over the years, such as (Nixon Mclean, Eldine Bapiste and Goolam Bodi). We have also been able to develop our own talented youngsters. The club had the services of Dale Benkenstein (SAA and Natal Captain), Baboo Ebrahim (coach),. The average age of Deltas current team is 20. Two of Delta’s younger players, Daryn Smit, Kershav Maharaj and Jo Marie Van Loggenburg have been selected for the SA under 19 and the SA Women’s senior team respectively.

Delta’s team is totally non-racial with players of all races and backgrounds representing the club.

Delta Cricket Club is very community orientated and has initiated the following programs:


Former and current provincial players are engaged in the coaching and development programs in schools under the leadership of Baboo Ebrahim, former South African Cricket Board player.

Coaching in the greater Durban area, especially, in the surrounds of the Overport and Sydenham communities and their schools

Coaching of children from underprivileged homes as listed below as the clubs contribution to social upliftment:

Four girls schools will be targeted for coaching, one from each sector of the community, namely, White, Indian, Coloured and Black.

Coaching of youngsters from the surrounding informal settlements. This will be part of the community upliftment and outreach programme.

Coaching across the Province of KZN

A coaching initiative which has already started in 2005 continued in2006 and currently in 2010.This initiative encompasses the entire KZN, from Port Shepstone in the south to Richards Bay/Empangeni in the north and Ladysmith/Newcastle inland.

Deltas youngsters who achieved in the provincial and schools arena.

Many other players have achieved provincial school honours. 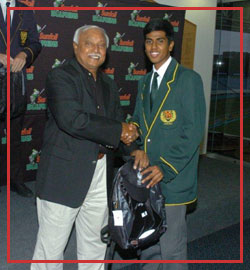